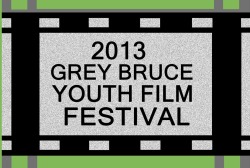 The Grey Bruce Youth Film Festival provides a venue for young filmmakers in grade 7 through 12 to compete with their peers for honours in the Festival, and to have their short films screened on the big screen at Owen Sound’s Galaxy Theatre for an enthusiastic audience during the festival.