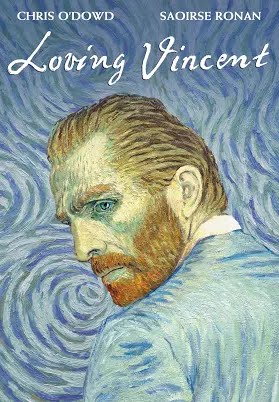 The story is presented through oil painted animation, a 6 year labour of love. A total of 125 classically trained artists from all over the world, including Ottawa-born Val Fulford, created more than 1,300 paintings, which became 65,000 painted frames. A young man goes to Vincent van Gogh’s last hometown to deliver a final letter to the troubled artist. He ends up investigating van Gogh’s final days there – was it murder or suicide?

“Loving Vincent is a visual masterpiece unto itself ” The Globe & Mail

“Brings a poetic sense of tragedy to the last act of van Gogh’s life, and fresh insight into the kind of man he was” Variety “Loving Vincent is a triumph in animation” We Live Entertainment

*Your Evening Film ticket (or Festival Pass) includes a complimentary drink, Chef inspired appetizers, Who's who mingling, popcorn, coffee; and a chance to win the Trivia Quiz prize in the MIFF Party Tent. As you exit each film, you have the opportunity to vote for the MIFF People’s Choice Award, the "Pomme" d'Or.)

(Enjoy all four films and all four parties for only $120 with the Festival Package. After selecting your seats, simply choose the “4 Festival” pricing from the drop-down.)

(Enjoy all four matinees for only $50 with your Matinee Package. After selecting your seats, simply choose the “Matinee” pricing from the drop-down.)

Thank you to tonight's sponsors: