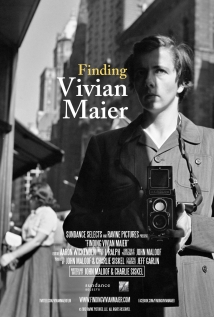 Finding Vivian Maier is the critically acclaimed documentary about a mysterious nanny, who secretly took over 100,000 photographs that were hidden in storage lockers. Discovered in 2007 at a local thrift auction house on Chicago’s Northwest Side, her body of work has impacted the world over and Maier is now considered among the 20th century’s greatest photographers. Directed by John Maloof and Charlie Siskel, Maier’s strange and riveting life and art are revealed through never before seen photographs, films, and interviews with dozens who thought they knew her. Her photographs are currently being archived and cataloged for the enjoyment of others and for future generations. These photos are part of a renaissance in interest in the art of Street Photography.

“A penetrating exploration of the link between art and obsession.” – The Boston Herald

“Who doesn’t love a story about an undiscovered genius?” – The Montreal Gazette

My Family Farm
by Erica Gulliver

(Enjoy all four films, all four parties for only $99 with the Festival Package. After selecting your seats, simply choose the “4 Festival” pricing from the drop-down.)

(*Your Evening Film or Festival Pass includes a complimentary drink from the Lounge bar; appetizers, popcorn, coffee; a chance to win the Trivia Quiz prize basket and the opportunity to vote for the MIFF People’s Choice Award.)

Buy your Matinee Ticket for Finding Vivian Maier, 2:00 p.m., Saturday, August 30: $15 (Enjoy all three matinees for only $40 with your Matinee Package. After selecting your seats, simply choose the “3 Matinee” pricing from the drop-down.)

Become a Friend of the Foundation and receive 10% discount off your film tickets.