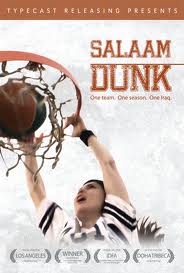 Basketball is much more than a game in this stirring documentary about a struggling Iraqi women’s team at the American University of Iraq in Kurdistan. For these resilient young women, most of whom have never been allowed to play any sport, it is a blissful release from their war torn past and the ethnic divisions that plague Iraq today. A mix of pop music, girl power, video diaries and game footage, Salaam Dunk follows these future leaders of the country as they deliver an uplifting message of hope and inspiration from an Iraq you’ve never seen before.

One team. One season. One Iraq. From the joy of their first win, to the pain of losing the American coach who inspired them, this film offers a vision of what Iraq could become.

“A stirring example of the possibilities for young Iraqis outside the country’s war zones.” – Variety

“Of the majority of images and video to be coming from Iraq right now, Salaam Dunk stands aside from the pack… While lighter fare than we’ve seen coming out of the Middle East recently, Salaam Dunk is not a work to be dismissed.” – IndieWire