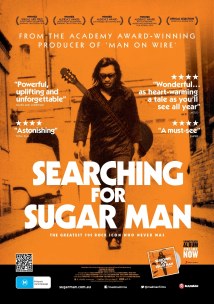 The incredible true story of Rodriguez, the greatest ’70s rock icon who never was. Discovered in a Detroit bar by two celebrated producers struck by his soulful melodies and prophetic lyrics, he recorded an album they believed would make him the greatest recording artist of his generation. The album bombed. Rodriguez disappeared into obscurity amid rumors of a gruesome on-stage suicide. But in white South Africa, the bootlegged album became an anthem for the anti-apartheid revolution. Rodriguez was more popular than The Rolling Stones. He never knew. The film follows two South African fans who set out to find out what really happened to their hero and uncovers a story about hope, inspiration and the power of music.

“An extraordinary journey.” – David Edwards, Daily Mirror
“You should see it. A disarming take on the meaning of success” – Time Out Magazine
“An unexpected window on the secret history of white South Africa” – The Guardian
“One of the greatest and most moving documentaries ever made.” – Q Magazine